Why am I Alive? How do survive my suffering? 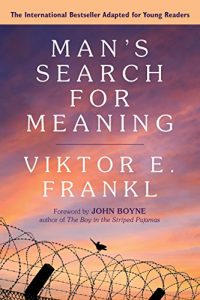 Victor Frankl was a psychiatrist who had written, what he thought would be his master work, when he was taken by Nazis to a concentration camp. He experienced the worst suffering and death that he could fathom. His wife, brother, mother, and father all died in the camps. He survived and got his freedom and life back after looking directly into the abyss of human evil. He started to ask the question “what does it mean?”

In his true master work “Man’s Search for Meaning” he says that finding meaning or purpose in the worst circumstances were essential to survival. In other words why are you here? What is your purpose for existing? What drives you to continue despite the pain inherent in life? Having a meaning increases survival and decreases suffering. For Frankl he began imagining himself explaining his experiences and how the camps informed his views on suffering, psychology, and life itself. He said his “suffering ceased being suffering once it had a purpose”.

Frankl had everything taken away from him including basic necessities for life. He learned to rebel against the camps and find integrity within himself by choosing his responses to the torture and deprivation. He said “everything can be taken but the last freedom- to choose ones attitude and ones own way”. Decisions not conditions form us into swines or saints according to Frankl. He illustrates this with a story of a walk he took with another survivor of the camps. The other man walked right through a beautiful bed of flowers destroying them. This was painful to watch for Frankl. He became an empathic soul during his time at the camps. The other man replied to Frankl’s protests by saying “after what I have been through I can do whatever I want”. Both men had the same experiences but walked away from them with very different meaning.

What is your purpose? What brings meaning to your survival? Is it to help people who struggle with things that you survived? Is it to die with the largest bank account in your family? Is it to write a novel that changes people’s views on the community you love? Is it to offer all your wisdom and support to your children for as long as possible? Is it to be the most feared manager in the entire Home Depot corporate structure? What does it mean to your existence when suffering comes to you? Choose your meaning and purposes thoughtfully. Our lives get built on our answers to those questions.

Below is a link to the free audio book of Man’s Search for Meaning. I highly recommend engaging with this powerful classic.