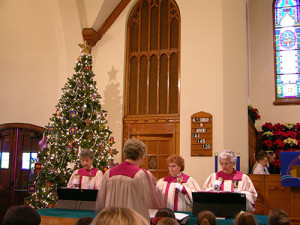 St. John’s of Farmersville has a dart team which meets every Monday night at 7:00 PM from September through May. The team has been awarded these trophies and they are dated from 1983 until 2003.  These trophies depict the year(s) the trophy was awarded. The dart team has a team schedule which has a list of other church dart teams within a particular league. The dart board depicts a baseball diamond. The player throws the dart onto a paper resemblance of a baseball field. When the player throws the dart, it could land on a home run area, the player could throw the dart into the “double” area or even a “strike out” area on the stencil. As mentioned above, the dart team begins in September and ends in May. 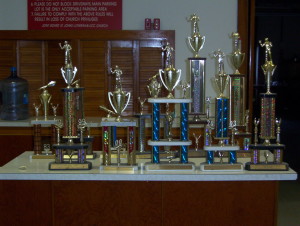